When you look at pictures from trendy startup offices you often see laptop riser stands.

One might think that you would do that to make your desk look neater. Or that it is for better posture. Or just to have yet another neat Apple-y looking apparatus in your vicinity for more hipster look. However, there is a benefit to laptop riser stands that some do not quite see upfront.

However, there’s more to it than meets the eye.

See, laptops and liquids don’t go that well together. As a matter of fact, I will dare to stipulate a law of liquids and laptops, which would go like this:

For any beverage A and laptop B, the chance of the said beverage spilling onto the laptop increases exponentially as a function of distance to the laptop and the laptop’s repair cost.

And let’s face it: a laptop will end up on the same surface with a beverage quite often. Be it a triple frozen latte-frappucino, or a dose of Mountain Dew – sugary drinks work even better because of their extra tackiness!

Which, inevitably, leads to this:

For some, with a little stroke of luck, it’s just round of cleaning - maybe a keyboard disassembly. Not a pleasant procedure with today’s laptops but certainly doable. But more often it ends in things way up on the pricing scale - motherboard replacements, dead peripheral ports and such.

A riser stand is a perfect solution for this problem. With an external keyboard only the keyboard gets exposed to the beverage elements, and the chance of the expensive laptop surviving disaster increases dramatically. 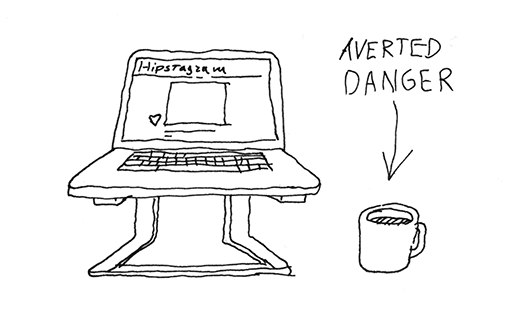 Now, some people have asked me - “am I then supposed to have a laptop stand at work and at home?” - to which the answer is a resounding “yes”. Also, pretty much any riser works. You don’t necessarily have to go hipster-shopping for it. For example, in the old days of Flame there were those bulky wooden risers used for supporting the huge Sony FW900. This was probebly the biggest (and badassest!) CRT of the day, and just like most the displays of the day it did not have a telescoping arm. These days we take one for granted (after being popularised by the flex-arm iMacs), but then if you wanted to have your display a bit higher your only option was a riser (or a forklift). Because that monitor was heavy, the risers for it also were quite big and usually made of wood. The additional use for those was to house the vectorscope and waveform monitors which could be used for quickly gauging the outgoing video signal.

Those stands get discarded these days. So I just grabbed one from the post house I worked at and set it up at home. At work I have a more conventional hipster-branded laptop stand.

Also, I find it convenient to have one permanent power adapter at each spot I work. This costs extra, but compared to the laptop the power brick is actually quite a bit of extra schlepping weight. Especially for the larger MBP models I fancy.

Then all you need is a keyboard and a mouse at each location where you work. In quite some tome of the riser policy I’ve had many beverage accidents, and none of them damaged the laptop - but I had one keyboard almost destroyed.

So get yourself a stand for some great good.