For the last few years, all the work I do has been equally split between Flame systems running on Linux and a couple of Macbook Pro’s running OSX. At Hectic we make use of NFS to make the same servers available to all of our client workstations which are an equal mix between Linux and Windows (Macs do not ouse our NFS facilities much). One of the problems I have encountered has been configuring the NFS mounts on my laptops for graceful timeout.

Now, in the ideal world NFS is designed to handle unmounts gracefully of course. That is, the client is supposed to suspend or fail on IO operations when the requisite mount is not found. Apple, however, in it’s infinite wisdom, designed a slightly different system for it’s OSX Server infrastructure. The mounts that you were used to designate in the Directory Services application or, more recently, in Disk Utility (explained in tutorials like this one are managed by automountd, Apple’s daemon controlling the directory mounts. This is the daemon that originally was designed to provide automounted user home directories and other handy things in the /Network folder on the root drive. In Mountain Lion this feature has been removed, but people try to use automountd nevertheless, explained in a post here.

However, automountd has been designed for limited applications - like computer labs at colleges and universities. It is not capable of detecting offline servers or stale mounts, and even with all the settings tweaked it will never timeout on an NFS mount. In practice, this means that if I have some NFS mounts defined on my laptop and I take the laptop somewhere where the NFS servers cannot be reached, the following will happen:

This is not pretty. What you actually want is a nice dialog like this: 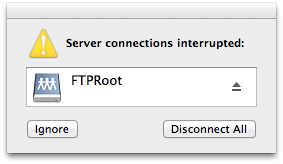 when the mounts are gone and then to be able to proceed with your business.

And this turned out to be remarkably simple to achieve. The easy solution is - do not use automountd at all, but mount manually. I do it with a Ruby script that I need to run in the morning once my laptop is up and running on the company network. When I come home, the OS falls back to the natural behavior of simply unmounting the stale shares instead of having automountd hammer on them indefinitely.